Clavally Bluestone Summer sat watching on the cliff high above, feeling the sea wind against her face, feeling it sweep back her long, dark hair. Smiling, she closed her eyes and imagined that it was the wind of motion, that she was running with the others down below.

She had run when she was a girl in races like this one, on so many islands across the Summer seas; hoping to be the winner, to be the Sea Mother's Chosen for the three days of the clan festival, garlanded with necklaces of clattering polished shells, fed the best and the sweetest of foods, given new clothes, honored by the elders, flirted with by all the young men. It had been a long time since she had run in one of those races. She had been a sibyl for nearly half her life now. How was it possible …? She opened her eyes, filling them with the endless bluegreen of sea and sky, ever-changing and yet ever constant; the mottled clouds, the shimmering ephemera of rainbows from a distant squall.

The Twins smiled down on their gathering today, warming her shoulders with luxuriant heat. Spring was in the air, making her remember with longing her body's own springtime. She glanced over her shoulder at the sound of footsteps. Her smile widened as she saw her husband making his way up the path with a basket of fish cakes and bread, a jug of beer in his other hand. She saw the gray-shot brown of his braided hair, his own trefoil gleaming in the sunlight.

Her smile faded as she watched him struggle up the steep hill. The stiffness in his joints was getting worse every year--too many years spent in drafty stone rooms, or making cold, wet crossings from island to island for weeks at a time. Danaquil Lu was a Winter; he had not been bred to the hard life of a Summer, and his body rebelled against it. But he rarely spoke any word of complaint or regret, because he belonged here, where he was free to live his life as a sibyl…and because his heart belonged to her.

The weather was warming; the Summer Star was brightening in their sky, Summer had come into its own. Perhaps the warmer days would ease his pain.

Her smile came back as she saw his eyes, bright and bluegreen like the sea, smiling up at her. He sat down with the basket of food, trying not to grimace. 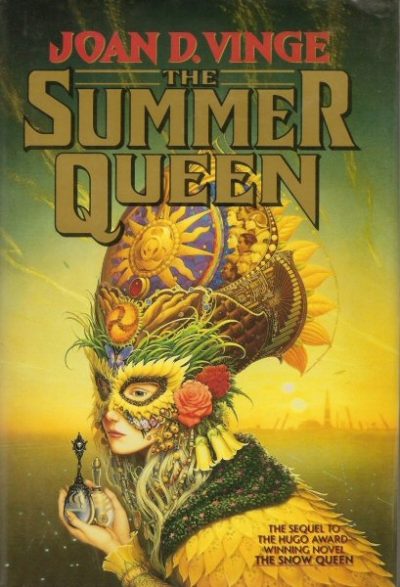 She put an arm around his shoulders, massaging his back gently as she pointed down at the beach. They watched a young girl with a bright flag of yellow hair sprint across the line first, watched her being embraced and garlanded and borne away. Danaquil Lu sighed, nodding; but somehow the gesture felt to her as if he had shaken his head.

He laughed in surprise. They ate together, enjoying the day and each other's company, an hour of solitude stolen from the questions of the festival-goers in the village below. They came down the hill again at last. A clan gathering was always a joyful time--a time for being reunited with relatives and friends from all across the scattered islands of Summer; for remembering the Sea Mother, giving the Lady the tribute She deserved.

This was the annual gathering of the Goodventures, one of the largest clans in the islands. They had been the religious leaders of Summer before the last Change--the clan of the previous Summer Queens--and they still held great influence. Down by the stone wall of the quay the winner of the footrace, a laughing, freckled girl of no more than fourteen, was tossing the ritual offerings of worshipers and supplicants into the restless green water.

Out in the bay, several mers from the colony that shared this island's shores looked on, a sure sign of the Sea's blessing. Clavally watched the girl's face, the sunlight radiant in her hair, and felt a sudden, unexpected surge of longing. She had made a choice when she became a sibyl. It was a hard, restless life, traveling from island to island, speaking the Lady's wisdom to those who needed her, seeking out and training the ones who would follow after her, to guide a new generation of Summers.

They said that it was "death to kill a sibyl, death to love a sibyl, death to be a sibyl. But even after she had met Danaquil Lu, she had gone on taking childbane, because it was too hard a life to inflict on a child, and she had no close relatives to help her raise one.

And Danaquil Lu, with his bent back and aching joints, needed more and more of her care. She squeezed his hand tightly, and told her restless body to be quiet. Soon enough her childbearing time would be past, and the questions in her heart would be answered once and for all. His eyes chose Danaquil Lu to ask his question of; she guessed it was probably a question about girls. Clavally let go of his hand with a farewell glance, granting the blushing boy privacy. She moved on through the crowd, half-hearing Danaquil Lu's voice behind her murmur " Input …" as he fell into the Transfer, and the boy's mumbled question.

But before her response could form, the woman said, "Are you going to Carbuncle? She has asked all the sibyls of Summer to make a pilgrimage to the City in the North. She claims it is the Lady's will. Carbuncle was the only real city on the entire planet, located far to the north, among the Winter clans. Its name meant both "jewel" and "fester. During that time the Snow Queen reigned, the Winters claimed the city and all the lands around it for their own--and sibyls were forbidden in Carbuncle. The offworlders despised them, the Winters hated and feared them.

Danaquil Lu had been born in the city, but he had been exiled when he became a sibyl. But now the Change had come again. The Black Gate that the offworlders used to reach Tiamat had closed; the offworlders had gone away, and taken their technology with them. Even now the seas were warming. Gradually they would become too hot for the klee the Summers herded and for many of the fish they netted at sea. The mers, the Sea Mother's other children, were migrating north, and the Summers were preparing for their own migration as well.

Their ways would become this world's ways again, as the Winters relearned the old rules of survival and harmony with the Sea, and the Summer Queens showed them the human face of the Lady's wisdom. And she watched her husband's face turn ashen. The scars on his cheek--the cruel legacy of his casting-out from Carbuncle--suddenly stood out like a brand. He took hold of her arm, not-quite-casually, steadying himself. He took a deep breath, filling his lungs with clear sea air.

Arienrhod is not without competition as Moon, a young Summer-tribe sibyl, and the nemesis of the Snow Queen, battles to break a conspiracy that spans space.

The Snow Queen, Intro to the Summer Queen

Interstellar politics, a millennia-long secret conspiracy, and a civilization whose hidden machineries might still control the fate of worlds all form the background to this spectacular hard science fiction novel from Joan D. The decimated Hydran population of Refuge is confined to a bleak "homeland," by a huge corporate state, Tau Biotech. Tau also controls Refuge's one unique natural resource, "Dreamfall.

Caught between Tau and desperate Hydrans who fight to reclaim their world, Cat must somehow forge the ruins of the past into a means to defeat Tau's brutality to save his people--and himself. Set against the backdrop of China's Cultural Revolution, a secret military project sends signals into space to establish contact with aliens.

An alien civilization on the brink of destruction captures the signal and plans to invade Earth. Meanwhile, on Earth, different camps start forming, planning to either welcome the superior beings and help them take over a world seen as corrupt, or to fight against the invasion. The result is a science fiction masterpiece of enormous scope and vision.

Kidnapped by an interstellar corporation and dragged to Earth, Cat is forced to use his skills to protect those he most hates, those who most hate him. The taMings. A cyber-augmented, DNA-incestuous clan of such wealth and power that their family arguments change the destiny of worlds. Now one taMing is a killer's target. But which? And who would dare? Seeking answers, Cat finds lies and savagery, passion and atrocity--trails that lead from crystal valleys to clubs for silver-skinned beauties.

From the homicidal enclaves of drug kings to a fanatic's pulpit. From the halls of the Assembly to a cyberspace hell. Seeking assassins, Cat discovers a mystery that could cost him his future. His sanity. His life. Account Options Sign in.

JOAN D. She has had a number of bestselling film adaptations published, including the 1 bestselling The Return of the Jedi Storybook and novelizations of Return to Oz and Willow, among others. She lives in Arizona. Reviews Review Policy.